I won’t try to explain in details what Linux Cached/Buffers memory is. In a nutshell, it shows how much of your memory is used for the read cache and for the write cache.

Usually when you look at your system memory usage and see that almost all of the unused memory is allocated for Cached/Buffers, you are happy, because this memory is used for file-system cache, thus your system is running faster.

Today however I observed quite an interesting fact – what I said above is still correct, however you don’t know how often these cache entries are used by the system. After all, it’s not the cache memory usage (or size) which makes the system run faster, but the cache hit ratio. If the file operations get satisfied by the cache (cache hit), then your system is running faster. If the system needs to make a physical disk I/O (cache miss), then you’d need to wait for a good few milliseconds.

What are your options, in order to know if your file cache is actually being used or is just sitting there allocated, giving you a false feeling that your system is running faster thanks to the used cache memory:

The latter is not a perfect solution, but in all cases gives you a better idea of your file-system cache usage, than just watching the totally used memory in Cached/Buffers, and never actually knowing if it is used/accessed at all.

Therefore, you can run the following every hour in a cron job:

The commands are safe (see reference for “drop_caches“), and you won’t lose any data, just your caches will be zeroed. The disadvantage of this approach is that if the caches were very actively used indeed, Linux would need to read the data back from the disk.

Here is how the Cached/Buffers graphics of a server of mine looks for the following few days: 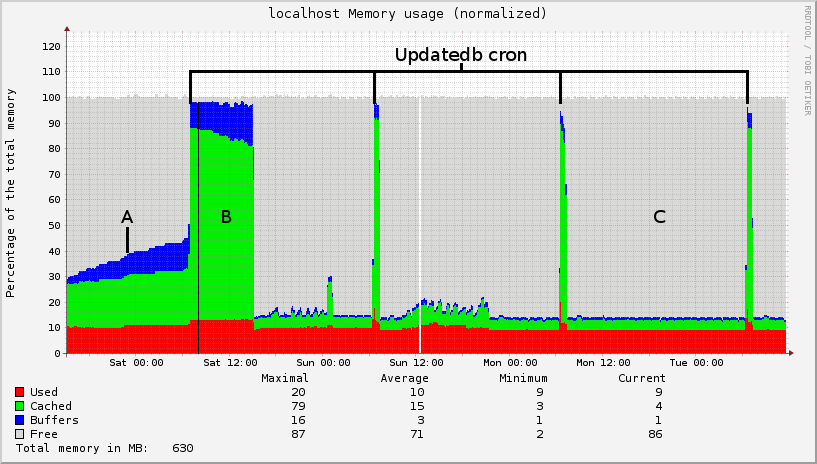 Pay attention to the points of interest which are marked. Here is the explanation and motivation to write this article: