I admire the idea of Google App Engine — a platform as a service where there is “no worrying about DBAs, servers, sharding, and load balancers”. And you can “auto scale to 7 billion requests per day”. I wanted to try the App Engine for a pet project where I had to collect, process and query a huge amount of time series. The fact that I needed to do fast queries over tens of 1000’s of records however made me wonder if the App Engine Datastore would be fast enough. Note that in order to reduce the amount of entities which are fetched from the database, couples of data entries are consolidated into a single database entity. This however imposes another limitation — fetching big data entities uses more memory on the running instance.

My language of choice is Java, because its performance for such computations is great. I am using the the Objectify interface (version 4.0rc2), which is also one of the recommended APIs for the Datastore.

Unfortunately, my tests show that the App Engine is not suitable for querying of such amount of data. For example, fetching and updating 1000 entries takes 1.5 seconds, and additionally uses a lot of memory on the F1 instance. You can review the Excel sheet file below for more detailed results.

Basically each benchmark test performs the following operations and then exits:

All Datastore operations are performed in a batch and thus in an asynchronous parallel way. Furthermore, no indexes are used but the entities are referenced directly by their key, which is the most efficient way to query the Datastore. The tests were performed at two separate days because I wanted to extend some of the tests. This is indicated in the results. A single warmup request was made before the benchmarks, so that the App Engine could pre-load our application. 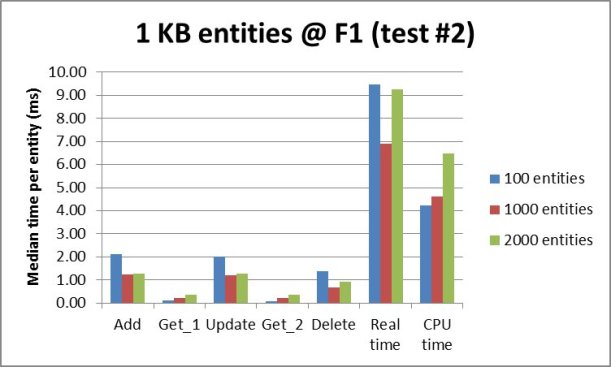 The other interesting observation is that the Datastore -> Objectify -> Java throughput depends a lot on the App Engine instance. That’s not a surprising fact because the application needs to serialize data back and forth when communicating with the Datastore. This requires CPU power. The following two charts show that more CPU power speeds up all operations where serializing is involved — that is all Datastore operations but the Delete one which only queries the Datastore by supplying the keys of the entities, no data: 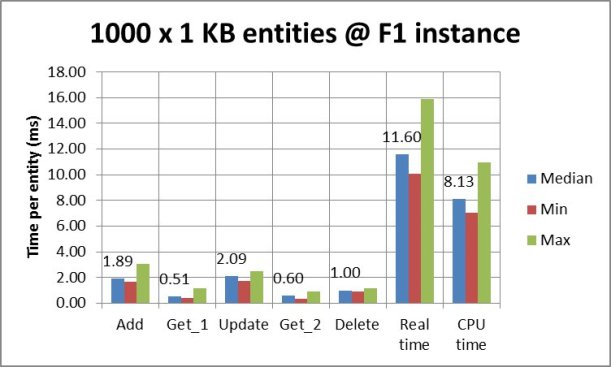 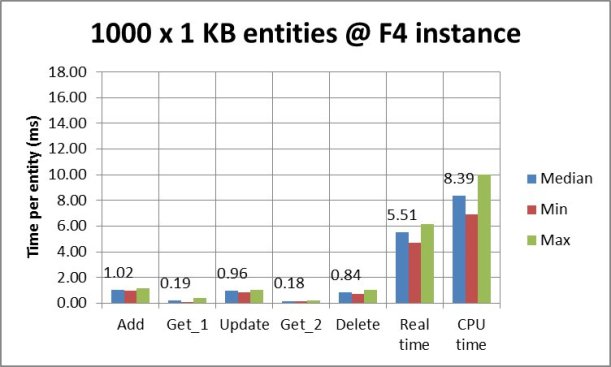 It is unexpected that the App Engine and the Datastore still have good and bad days. Their latency as well as CPU accounting could fluctuate a lot. The following chart shows the benchmark results which we got using an F1 instance. If you compare this to the chart above where a much more expensive F4 instance was used, you’ll notice that the 4-times cheaper F1 instance performed almost as fast as an F4 instance: 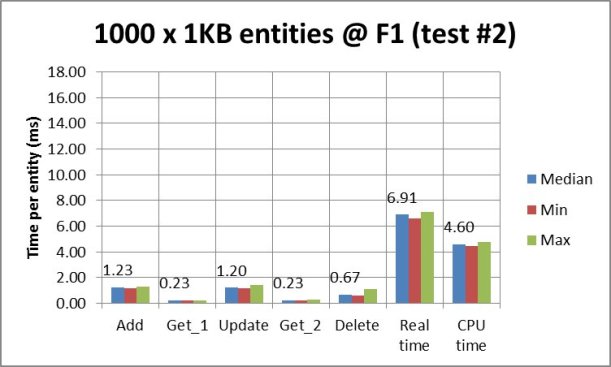 The source code and the raw results are available for download at http://www.famzah.net/download/gae-datastore-performance/